77-80 題
Turtle Island, located 10km off the coast from Toucheng, gets its name from its resemblance to a sea turtle when viewed from a certain angle. Its rich ecological and geological beauty has attracted many local and foreign visitors every year. Looking out from the many different places along the Yilan coast, one is amazed that its outer shape is always changing, and some people even perceive the illusion that the Turtle is turning its head!
Local people have believed that the Turtle is a heavenly spirit that protects Lanyang Plain. One legend comes from the Ming Dynasty. As Zheng Cheng-Gong was crossing the strait he shot a female turtle. People said that the island was transformed by the mother turtle after it gave birth, and the sulfur holes on the island came from its shot wounds.
Since the early days of the Ching Dynasty, Turtle Island has been famous for its sights of diverse beauty. The sign of Heavenly Turtle Wearing a Hat is often used as weather forecasting for Lanyang Plain. Brimming with numerous fabulous scenes and sights above water, Turtle Island is even more fantastic underwater. As a very young volcano, Turtle Island is rich with seabed hot springs. The milk-colored hot spring spurting from the seabed alters the sea color into the beautifully two-colored Yin-yang sea embodying the scene of Seabed Spa Surging Up High. There are tens of thousands of crabs, known as Weird Turtle Crabs, living upon the seabed near the steaming heat and acidity generated by the sulfur.
Shallow and flat, the sea area around Turtle Island is a perfect whale-watching site. There are eight different species of whales and dolphins that have been spotted around Turtle Island. They are the Long-Snouted Spinner Dolphin, Bottlenose Dolphin, False Killer Whale, Long-Snouted Common Dolphin, Pantropical Spotted Dolphin, Dwarf Sperm Whale, and Risso's Dolphin and Sperm Whale, with the Long-Snouted Spinner Dolphin accounting for the majority. The "Turtle Island Whale Trip" was launched in 2007 to promote awareness of Taiwan's cetacean world and to encourage the development of sustainable ecotourism. Visitors are warmly welcome to set sail for Turtle Island to experience the dance of the whales and dolphins.
【題組】78. According to the legend, the sulfur holes on Turtle Island was formed when____
(A) Zheng Cheng-Gong’s wife was giving birth
(B) a mother transformed the island into a turtle
(C) Zheng Cheng-Gong shot a female turtle and injured her
(D) the female turtle shot by Zheng Cheng-Gong was in labor

By winning this Olympic gold medal（奧運金牌）for Taiwan, Chen Shin-hsin became a heroine（女英雄）at once in 2004. It’s incredible（不可置信）that she went from being a “betel nut beauty（檳榔西施）” to being a national heroine. Her story was reported in every newspaper and magazine.
When she was under 16, she had problems in her love life. Chen Shin-hsin gave up studying Taekwondo（跆拳道）. To make a living（謀生）, she decided to be a “betel nut beauty”. But she regretted（後悔）. She decided to return to（回到）her family and study.
To make up（補救） for the wasted（浪費的）time, Chen Shin-hsin not only worked harder when she practiced Taekwondo but also started studying at Taipei PE College. The story of her success shows us: Anyone can change his life if he works hard.
【題組】34. Who is the first heroine for Olympic gold medal for Taiwan in 2004?
(A) Chin-Cheng.
(B) Chu Mu-yen.
(C) Chen Shin-hsin.
(D) Jay Chou. 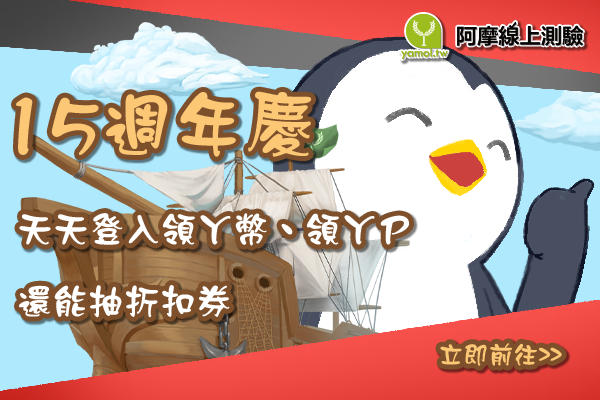